Dot’s Pretzels: The Transformation of a Family Owned Business 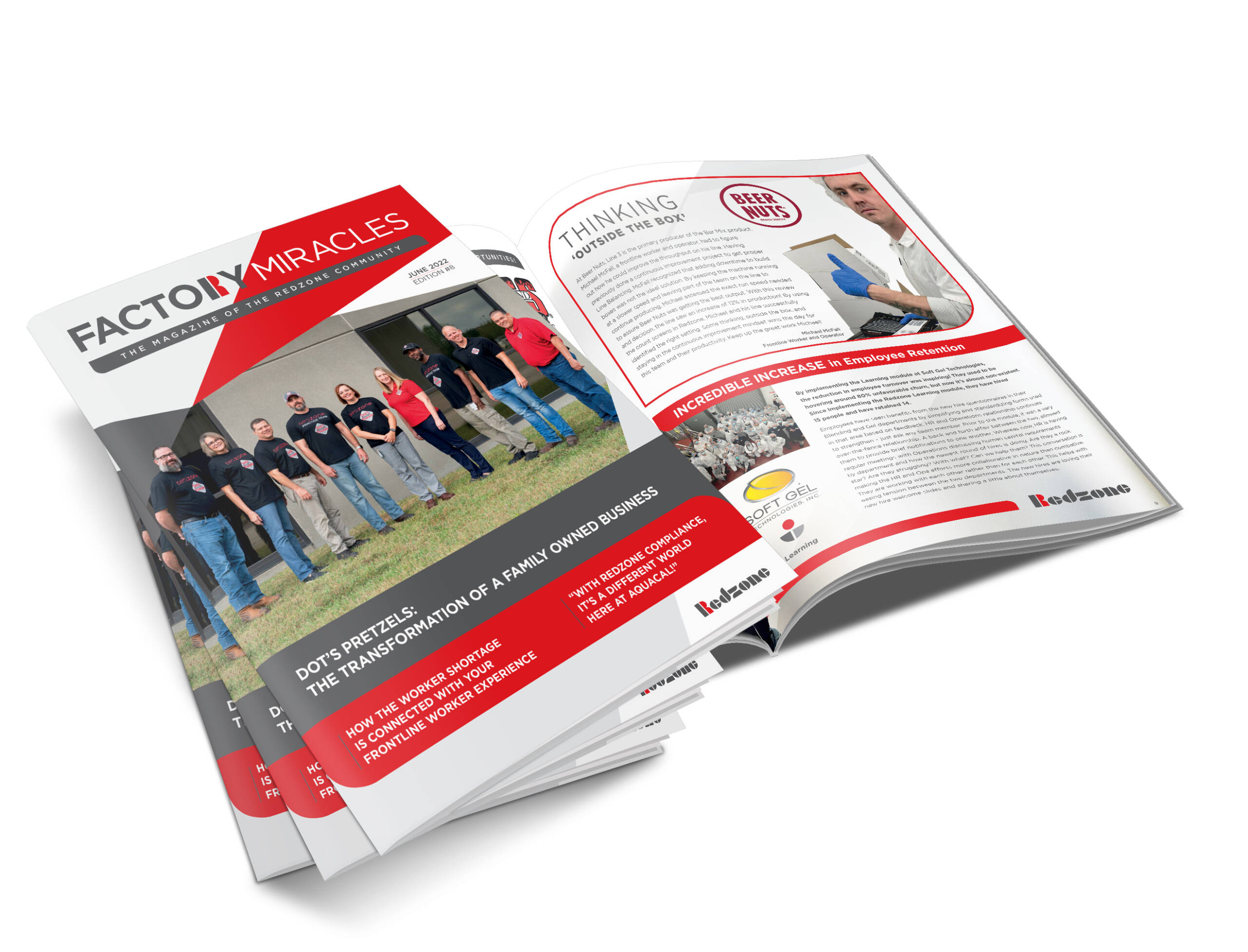 Behind the Pretzel Pouch

Dot’s Pretzels’ seasoning blend may be top secret, but when you step into any of their four facilities, shop floor employees aren’t keeping their Redzone productivity successes a secret. Behind each pretzel twist – whether it’s the honey mustard seasoned, southwest seasoned, or their original flavor – Dot’s has a wonderfully committed team who have recently transformed from a family-owned business into a Hershey-owned company. When you step into any of their facilities, you not only smell their pretzels and seasonings but also get a gust of pride, culture, and excitement from their people about the part they play in the company’s growth and the snacks they manufacture.

But how did the company get there and what made it all happen?

The story begins and ends with hometown pride with roots in North Dakota, Arizona, and Kansas. Day-in and day-out they are a brand that prides itself on being the hometown snack people can’t live without. Grocery store after grocery store and big box after big box store, this team, since its inception and especially throughout the pandemic, has gone through transformational growth.

When people wanted their favorite comfort foods and snacks during lockdowns, Dot’s products were on the shelves and continuously filling orders, thanks to the tireless work of their shop floor employees. But as good as it all sounds, life at Dot’s wasn’t always sweet and buttery; there was a time – not too long ago – when workers were just clocking in and clocking out, collecting a paycheck. Turnover was 70% and the workforce consisted heavily of temporary employees. It was just a job. Many of these temporary employees were the first ones to admit they had no skin in the game and didn’t care as much about the business. On top of all of this, managers and leads were doing manual reporting which made compliance challenging for the QA Teams. Productivity tracking? Little of this was happening in ways that could be shared with all of the staff; and employee recognition and rewards were not a focus, despite the tremendous output occurring.

Before working with Redzone, Dots’ OEE was 26%. Something had to change. The product was amazing, and consumers were coming back for more. But an ingredient was missing in the addictive pretzel swirl and soon the true secret ingredient of Dot’s was unlocked.

Several senior leaders were impressed with Redzone – having previously used it at other facilities. The need to boost morale, culture and collaboration, were all the reasons to begin implementation. A boost in productivity was needed to get more product out the door and to fill the piling orders. Leadership immediately bought 150 iPads for each of their four factories and turned on the Redzone Compliance module. Light bulbs and ideas began firing off. They went from a factory ‘working in the dark’ to one shining brightly, as they began using data visualization to show daily productivity reports.

“The energy in the plant has gone up tremendously. It’s infectious”

With such high demand – they almost can’t keep up! A win at one facility is replicated at the next Dot’s plant – including a changeover reduction from 12–18 hours to now under 6. The tools for success are wrapped up in their contagious culture and addictive pretzels! Mary Leslie, Director of Operations, said the drive to never disappoint customers has frontline workers working extra shifts and longer hours. “Everyone wants it!”

Redzone at Dot’s is a source of pride, a tool to promote their staff, and the voice of truth for growth – with the data right in the palm of their hands. At the Dot’s Lenexa team plant, those results include 76% productivity improvement, 200% increase in output, and a 30% reduction in changeover. They are still seeing amazing results since their Town Hall, including a current 152% productivity improvement. “Installing Redzone helped to create a way to measure productivity, engage our employees, and have their voices heard. It has also given us a better way to manage our compliance and prepare for SQF audits. The results in the past five months have been fantastic,” Mary Leslie says.

Lenexa Plant Manager, Matt Miller, and CI Manager, Angie Martin, shared that there’s no red tape at their plant – when construction was happening at one facility, lead laborer, Cecil Washington, suggested moving barrels in a certain area out of the way so more products could be placed there. The idea was green lighted, tried, and listened to. Using Redzone increased safety across all four plants. Safety issues can be recorded in real-time, and maintenance can address issues quicker. It’s also been a “great motivational tool and a great communication tool,” according to Mary Leslie, Director of Operations. “The energy in the plant has gone up tremendously. It’s infectious!” Dot’s has seen more internal promotions as people have stepped up to use the technology and even help roll it out. The company was able to go paperless and conducted a successful SQF audit. The results have been stunning. At their Lenexa site they completed their Redzone launch with incredible results. Their improvements increased production by 67% in just one of their facilities. Their Edgerton site had a 60% productivity improvement and 202% increase in out count and they also recorded their lowest month in scrap and highest month in sales.

From Untapped to Exuding Culture

The Dot’s culture was on the cusp of greatness. It was simply untapped and Redzone brought this out full force. (This team has worked very hard and proudly won a 2021 Productivity Award). Once launched, the friendly competition began immediately as shop floor workers noticed their output changed bars from red to yellow to green, triggering stars and smiley faces for everyone they work with to see. High fives and chats fit in like a glove at each facility. The game was on to see who had the best OEE. Almost instantaneously different departments started engaging teams cross-functionally to share ideas and praise one another for doing a good job.

“It’s given all of us a voice. We can talk about everything from our goals as a team to planning for the day,” said Jessica, who started as a temporary worker and is now Training Lead. Christina also started as a temporary worker back in 2017 and has worked in the packaging, mixing, and warehouse departments. Right away she noticed and saw how instrumental Redzone would be for cross-functional work between the Dot’s plants. The Leadership Team did not hesitate to induct new staff, like Karee, into the world of Redzone. She and all new hires were told about Redzone in their interview process and hired right away. From a place that once had a majority of temporary employees that clocked in and clocked out for a paycheck, it now operates in a 180 degree fashion, with supervisors and shift leads claiming that this is the best job they’ve ever had. With tears of joy in her eyes, Christina Castro, (who started as a temp) said, “Four years ago the company was less organized, with endless paperwork. Redzone has brought us into the 21st century. I love what we do!” The common theme of employees moving up quickly in the company is so common it’s jaw dropping – and this is not because positions need to be filled, but because there is a clear path for growth.

Robert Mitchell, started as a general laborer at Dot’s Lenexa and was promoted to Lead in Packaging in 2020. Along the way he has helped the Lenexa plant grow from initial hand packing and manual work to more automated systems. As the plant continued to add new equipment, Rob took the time to learn how it operated, and then trained his employees, raising the overall level of knowledge in the plant. When Lenexa installed Redzone at the end of 2020, Rob was one of the first on board, asking questions, completing checks, helping us fine tune the OEE and downtime codes. From day one, he has been a big proponent of huddles, and has coached each of his employees to lead huddles every week. It’s amazing to see all the individuals who can lead effective huddles thanks to his leadership. Rob has inspired and encouraged his co-workers to push themselves further than they ever imagined – from public speaking to learning new skills.

Rob was an active member in the changeover Kaizen that led to 30% reduction in changeover. His leadership and engagement with Redzone paved the way to traveling to the Arizona site to assist with huddles. He laughs and smiles saying, “I don’t know Spanish, but thanks to Redzone I was able to train full teams in the app.” His hard-work and dedication led him to receiving another promotion in July 2021, which he proudly shares – “I’m a Shift Supervisor. I did all of this in a few years!” When you ask Rob about Redzone and his favorite aspect, without hesitation he says, “it brings people together as a team and helps everyone put their best foot forward.” Did we forget to mention that Rob’s line currently has a 120% productivity improvement since launching Redzone!? GO TEAM!

“This is my dream job. I have dreamt of doing something like this for over 10 years,” says Aaron Johnston when you bring up Redzone and his day-to-day work. Aaron began his career at Dot’s Lenexa site as a production laborer in March of 2020. His hard work ethic and ability to interact with people was recognized quickly. He was promoted to a Lead in September and was identified as a Practice Team member for the Redzone launch. His effective communication with frontline employees and engagement with Redzone was noticed during launch week. He engaged his team in the huddles and notified the coach of any data/rates issues, quickly becoming the epitome of a great worker.

From recognizing fellow employees to participating in the Kaizen event, he led the way in his area securing a 64% productivity improvement in an area/team of mainly temporary employees. The Sanitation Kaizen, Aaron participated in, resulted in a 30% reduction in downtime associated with cleaning. Aaron furthered his leadership and communication by creating several one-point lessons that are used throughout the facility to assist in troubleshooting and reducing downtime. Lenexa is using some of Aaron’s work in the Mixing and Oven areas for their other site in Arizona, had his OPLs translated into Spanish for their Compliance launch in July, and will also be assisting with Redzone training in Arizona. In July of 2021, Aaron was promoted to work on the CI/Training Team as a Training and Development Specialist. His focus is now training operators, training new hires, reducing downtime, and improving OEE using Redzone data as the baseline for improvement.

Robin Caylor is a production laborer and within a few weeks Redzone was on her line and she actively participated in huddles, quickly asking to lead huddles on her own. She even made a suggestion to assist the new Spanish-speaking team members, asking for a Spanish translation added to the huddles to ensure communication was clear and on-point. Robin also requested new downtime codes to make sure the plant was truly capturing the root cause of any issues. Dot’s leadership said, “We’re very excited for what she has done to help make Redzone successful.” Since ensuring Dot’s is capturing good data on the line she operates, her line has increased productivity with an improvement of 56%!

Dot’s Pretzels won a 2021 Productivity Award and will continue to soar in our community because of embracing these key strategies:

All Hands on Deck at Marianna Beauty 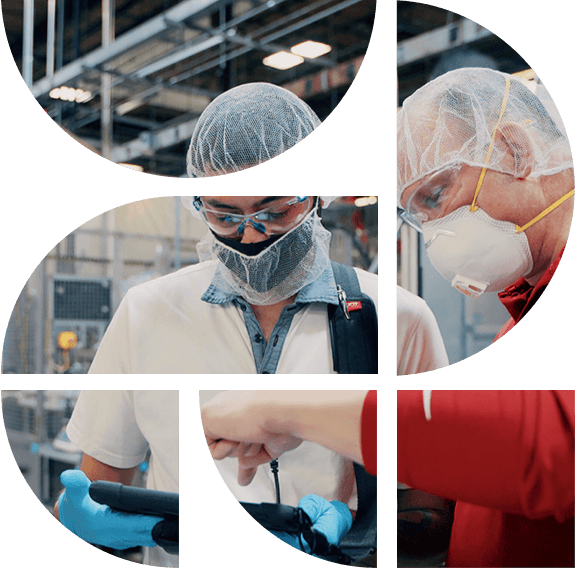